For the stories in our second chapbook, each of us at The Homeless Moon chose as inspiration a fictional setting. Here’s the first scene of mine, “The Cannon and the Prophetess”:

One Kestrel pronounced the last phrase of the sonnet he had been reciting for the Duchess of Ennasin, and the crowd of loungers who made up her court erupted in applause. Acknowledging their flattery, he lowered himself to one knee.

“No, no,” said the Duchess, twiddling her manicured fingers to indicate he should arise. “You mustn’t prostrate yourself. Your primitive origins are of no consequence””you outrank me, Your Majesty!”

The assembled nobles tittered at their hostess’s kind condescension.

With an abruptness inappropriate to tact””but which he had come to know would be expected, secretly desired, of an educated savage such as himself””One Kestrel surged to his feet like a predator ready to strike. The bones and beads sewn in his robes of state rattled satisfactorily, the brilliant feathers of his royal headdress rippled, and he allowed his eyes to flash just so.

The nobles gasped, recoiling; this time, the nervous laughter of the Duchess betrayed an underlying terror. “My dear Captain Saturno, you are to be commended on such a magnificent find! If only you would allow me to purchase him from you.”

Captain Saturno took a knee himself. Resplendent in his shining steel cuirass and waxed moustache, he made a flourish, and taking her offered hand, placed his lips to her ring. “Your praise is acknowledged most humbly””but I am afraid King Kestrel cannot linger, for he is called away on an engagement at another court””and I’m sure Your Eminence could not wish to sully His Majesty’s reputation by making him late.”

“At the very least,” the flush Duchess begged, “allow me to offer His Majesty a parting gift””a boon. Name anything! It shall be wrapped and placed in his flagship’s stateroom, where my court’s generous donations to his cause already await.”

One Kestrel drew back overeducated lips from filed teeth, and throwing a ravenous glance at his master and keeper, uttered that too-familiar entreaty with which he’d caused himself to be expunged from so many a court. “There is one small secret I dearly desire. I can only
further impose on Your Eminence’s hospitality in this: if you would, provide me with your military’s recipe for gunpowder.”

Amidst the ensuing uproar, Saturno clutched One Kestrel by the elbow and propelled him from the court. His face was bloodless, blank””but whether with rage or something else, One Kestrel didn’t know.

Once they were safe aboard the caravel Constança, Captain Saturno barked orders to throw off the moorings and get underway. He escorted His Primitive Majesty One Kestrel, King of America, to his sumptuous, gift-strewn lodgings in the brig, shoved him inside, and slammed the door.

And here are the relevant lines from Rabelais’ Gargantua and Pantagruel, from which I took my inspiration:

Pantagruel then asked what sort of people dwelt in that damned island. They are, answered Xenomanes, all hypocrites, holy mountebanks, tumblers of beads, mumblers of ave-marias, spiritual comedians, sham saints, hermits, all of them poor rogues who, like the hermit of Lormont between Blaye and Bordeaux, live wholly on alms given them by passengers. Catch me there if you can, cried Panurge; may the devil’s head-cook conjure my bumgut into a pair of bellows if ever you find me among them! Hermits, sham saints, living forms of mortification, holy mountebanks, avaunt! in the name of your father Satan, get out of my sight! When the devil’s a hog, you shall eat bacon.

I’m not going to make any attempt to synthesize one with the other; chances are it would turn out a disaster, and anyway I’d much rather just encourage you to read the story and form your own opinions.

So instead, I’ll close with Gustave Doré’s utterly demented evil jester illustration to Rabelais’ prologue, which starts like this:

Most noble and illustrious drinkers, and you thrice precious pockified blades (for to you, and none else, do I dedicate my writings)…. 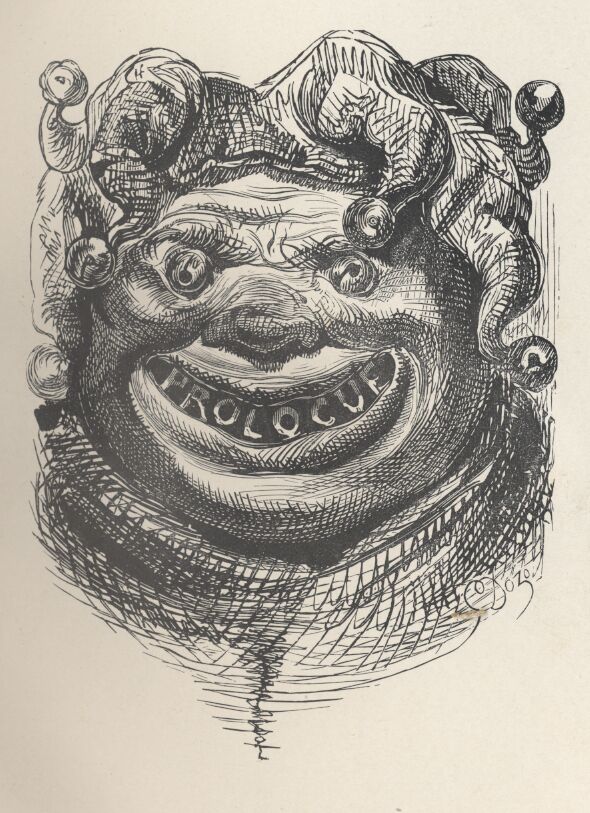