Just wanted to take a moment to bask in the joys of summer. The spirit of the season hadn’t fully hit me at Solstice, though I celebrated in due style. And I tell you: it was hard times that brought it on at last. Away from my garden for a week at TNEO. It rained and rained. Ripping thunder while we sat around the critique table. The skies clear one moment, drenching the next. We’d watch the sky out of the classroom windows all day, make a snap judgment when the time came and run for it. And inevitably get deluged.

I got home and the same storms had knocked over a big old rotten birch right on my heirloom tomatoes. Everything was folded in half, all withering from rot. Now we’ve got a bunch of green tomatoes sitting on the windowsill–fruit from branches broken by the storm, slowly ripening by magic. 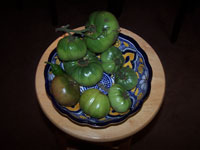 For dinner I had grilled kielbasa, rosemary potatoes and one roasted anaheim pepper. I made myself a sandwich with homemade rustic bread. Pint of cream ale on the side. Purple Cherokee tomatoes for appetizer, sun golds for dessert. And farm stand soft serve for second dessert.

Tonight I get to go out in the dew with my tripod and try to take pictures of fireflies.

There’s mosquitoes on the river.
Fish are rising up like birds.
It’s been hot for seven weeks now,
Too hot to even speak now.
Did you hear what I just heard?

I am in the middle of such a moment of bliss that I’m actually tempted to play against character and turn this into a meme. You there, consider yourself tagged. Give me 100 words on the small pleasures.

I’ll get back to the writing now, I promise.