At Singing Brook Farm, where I work, a colony of white-faced hornets have been building a nest under the eaves of one of the drying sheds since sometime in July. By now, the hive is enormous. Way bigger than my head. I would say it is a minimum of three gallons in volume, and full of about a thousand hornets. White-faced hornets, by the way, are freaking terrifying. They’re jet-black, huge, surly at the best of times, and built like bruisers–much bigger than yellowjackets, thicker and more compact than wasps. They are capable of both biting and stinging at the same time, and of stinging repeatedly without dying like honeybees. When confronted with a human opponent, they prefer to attack the face. They take their name from the fact that every one of them comes with her own little death’s-head Punisher mask. And they’re loud. The sound of a thousand white-faced hornets buzzing three feet from your head is remarkably similar to that of a chainsaw. 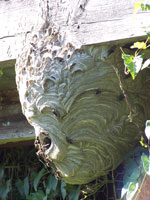 Why, you may ask, am I hyping these hornets all up like they were the unholy vespine harbingers of the apocalypse?

Because today at work, it was my task to face them down.

The side of a drying shed, as you might imagine, is not the ideal place for a massive hive of vicious, territorial hornets. Drying sheds need to be open to circuating air. And people need to be able to get inside them and harvest the herbs without getting massacred. For three months we had lived with these hornets in an uneasy truce. But finally, inevitably, somebody got attacked: Louise, a very nice lady who meant them no harm. It was time for the supergreen animal-loving vegan environmentalist pagan pantheists of WiseWays Herbals to overcome their prevailing sense of empathy with all living things and knuckle down to Mother Nature’s bottom line: kill or be killed.

It was time to break out the chemical weapons.

Not without some lingering guilt, both for resorting to this necessary act of cruelty and for the horrible poison that must be employed in its execution, my boss Mariam went out and nerve-gassed the hive. This was very brave of her, as she is allergic. Wasn’t as dangerous as it sounds, though, since you can fire the nerve gas accurately enough to fry the wings off a hornet’s back from a range of twenty-two feet. Scary stuff. Wielding the aforementioned doom cannon, she killed all the hornets she could reach, then headed off to the sweatlodge to cleanse herself of the horror of the deed.

Two days pass, during which time nobody else can bring themselves to go near it. Enter me. I am charged with somehow removing the hive, in all its beautiful, watermelon-sized, alien monstrosity, from its tenacious perch. The plan is to verify the moribundity of the swarm, then wrap up their lair and take it home as a souvenir. I should make it clear that I volunteered for this. It is a kickass nest, after all. “Surely they’re all dead by now,” I tell myself. “You’d better hope so,” my co-workers warn. I brush off their doubts.

Armed only with a stepladder and a serrated bread knife, and protected only by a pair of work gloves and a hoodie zipped up to my chin, I go forth to meet my foe. The hive is silent, dangling from the eaves of the drying shed three feet above my head. Reaching up, I slap the eerily-patterened surface of the hive with the flat of my blade. The wall gives gently, then rebounds. There is no other response. I risk moving closer to peer into the orifice of the nest, two inches in diameter, packed with poisoned corpses. I strain my eyes searching for movement, but find none.

I retrieve the ladder, prop it up against the shed. Clutching the bread knife, I climb until my head is level with the hive. Gingerly, like a tenderfoot coroner making his first incision into the gray flesh of a corpse, I slide the knife along the shed’s wooden eaves until it penetrates the outer flesh of the hive. I inch the knife forward until the fricking enormous thing has completely swallowed the blade. Then I saw away ever so carefully, trying to separate the hive as cleanly as possible from the wood of the shed. But the hive is so huge that from my perch I can barely reach half its support without being forced to lean far over, placing my vulnerable face dangerously close to that black hole stuffed with seemingly dead hornets. They’re all dead, I remind myself. Ya wussy. This pep talk fails to work, in spite of the adrenaline that is now buzzing through my head. I recall, not without a certain glee, that I am being paid for this.

I climb down off the lader, move it around to the other side of the hive. I climb up again and repeat my sawing efforts. After several more minutes, I have plunged my sixteen-inch knife up to the hilt into this thing from every accessible angle, and it still shows now sign of coming loose. I feel rather like I’ve been trying to coax a slightly burned loaf of bread free from the pan. A loaf of bread filled with bees.

I shift tactics. This time, I try using the knife as a lever to pry the hive away from the wood. At first, it seems to be working; I hear a few encouraging cracking sounds. Then suddenly, under the blade of the knife–movement. Hornets. Living hornets, their death’s-head faces haggard but enraged.

I throw myself sideways off the ladder, shrieking like a little girl. Half a dozen hornets buzz after me, and I flee in the direction of the house, brushing at my clothes even though I’m pretty sure none of them touched me.

I stand in the kitchen, taking deep breaths. A housefly buzzes around my head and I cringe away like it was a bullet. Right, I think. Screw this. Not worth it.

After a few minutes the call of the hive wins me over. I go back outside. The hornets are still buzzing around the hive, occasionally alighting at the entrance to run their feelers across the bodies of their comrades. They seem disoriented. Listless. I still count only five or six. Perhaps they are the last addled remnants, deprived of purpose now that their queen is dead? Yeah. That’s totally what they are. Sure.

I yank hard on the drawstrings of my hoodie. I climb back up the ladder, brandishing the knife. Ignoring the whizz of hornet wings roaring past my head, I plunge in the knife. I pry.

Whump. The whole nest falls away from the eaves of the shed and plummets nine feet into the rose bush below. Again completely spooked out of my mind, I leap off the ladder away from the hive.

I spend about ten minutes feinting at the damn thing, dancing like a prizefighter (not really like a prizefighter), trying to work up the balls or the stupidity to go in there and pick up the enormous hive in my gloved hands. Hornets are spilling out of it now pretty much everywhere, dead or dying.

Finally, I grab it. Yeah, that’s right. A big ole watermelon-sized hornet’s nest full of not-quite-dead hornets. In my hands.

It’s mine! The greatest and most kickass show-and-tell specimen the world has ever seen!

If only I were still in kindergarten.